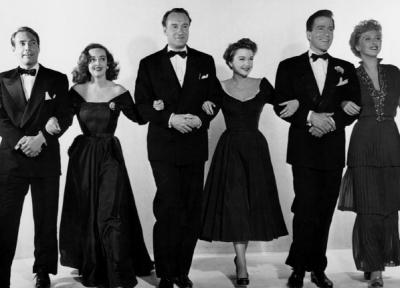 All About Eve is a 1950 movie drama written and directed by Joseph L. Mankiewicz, from the story "The Wisdom of Eve", by Mary Orr.

It was nominated for 14 Academy Awards and won six, including Best Picture. Widely regarded as a classic, it has been selected for preservation in the United States National Film Registry.

Margo Channing, the biggest star on Broadway, is beginning to show her age when she encounters a young woman named Eve who claims to be her biggest fan and who worms her way into Margo’s life, eventually becoming her secretary. Gradually, it is revealed Eve is more scheming and duplicitous than she seems. She begins working to supplant Margo, taking the role of her understudy and engineers Margo’s absence so she can play her role onstage. Eve gives such a good performance her own career as a theatre star begins to take off, and she becomes a bigger star than Margo. At the end of the film, Eve herself encounters an apparently besotted young fan, and it is implied the cycle will continue.

While performing in The Two Mrs. Carrolls during 1943 and 1944, Elisabeth Bergner allowed a young fan to become part of her household, and employed her as an assistant, but later regretted her generosity when the woman attempted to undermine her. Referring to her only as "the terrible girl", Bergner related the events to Mary Orr, who used it as the basis for a story "The Wisdom of Eve". In the story, Orr attributed a more ruthless character to the girl, and allowed her to succeed in stealing the career of the older actress. Bergner later confirmed the basis of the story in her autobiography Bewundert Viel und Viel Gescholten (Greatly Admired and Greatly Scolded).

In 1949, Mankiewicz was considering a story about an aging actress, and upon reading The Wisdom of Eve felt the conniving girl would be a useful added element. He sent a memo to Darryl F. Zanuck saying it "fits in with an original idea [of mine] and can be combined. Superb starring role for Susan Hayward". Mankiewicz presented a film treatment of the combined stories under the title "Best Performance". He changed the main character’s name from Margola Cranston to Margo Channing and retained several of Orr’s characters, Eve Harrington, Lloyd and Karen Richards, and Miss Caswell, while removing Margo Channing’s husband completely and replacing him with a new character, Bill Sampson. The intention was to depict Channing in a new relationship, and allow Eve Harrington to threaten both Channing’s professional and personal lives. Mankiewicz also added the characters Addison DeWitt, Birdie Coonan, Max Fabian and Phoebe.

Zanuck was enthusiastic and provided numerous suggestions for improving the screenplay. In some sections he felt Mankiewicz’s writing lacked subtlety or provided excessive detail. He suggested diluting Birdie Coonan’s jealousy of Eve so the audience would not recognise Eve as a villain until much later in the story. Zanuck reduced the screenplay by about 50 pages and chose the title All About Eve from the opening scenes in which Addison DeWitt says he will soon tell "about Eve, all about Eve". [1]
Bette Davis was cast as Margot Channing only after Claudette Colbert severely injured her back and was forced to withdraw shortly before filming commenced. Davis, who had recently ended a 19-year association with Warner Brothers after several poorly received films, later commented she had read the script in one sitting and immediately accepted the role after realizing it was one of the best she had ever read. Channing had originally been conceived as genteel and knowingly humorous, but with the casting of Davis, Mankiewicz revised the character to be more abrasive. Among other actresses considered were Mankiewicz’s original inspiration, Susan Hayward, rejected by Zanuck as "too young", Marlene Dietrich, dismissed as "too German", and Gertrude Lawrence, who was ruled out of contention when her agent suggested, "Wouldn’t it be nice if Gertie sat by the piano and sang?" Zanuck favored Barbara Stanwyck, but she was not available.

Anne Baxter had spent a decade in supporting roles, and had won the Academy Award for Best Supporting Actress for The Razor’s Edge the previous year. She got the role of Eve Harrington after the first choice, Jeanne Crain, became pregnant. Crain was at the height of her popularity and had established a career playing likable heroines; Zanuck believed she lacked the "bitch quality" required by the part, and audiences would not accept her as a deceitful character.

The role of Bill Sampson was originally intended for John Garfield or Ronald Reagan. Reagan’s wife Nancy Davis was considered for Karen Richards and Jose Ferrer for Addison DeWitt. Zsa Zsa Gabor actively sought the role of Phoebe without realizing the producers were considering her, along with Angela Lansbury, for Miss Caswell.
Mankiewicz greatly admired Thelma Ritter, and wrote the character of Birdie Coonan for her after working with her on A Letter to Three Wives in (1949). As Coonan was the only one immediately suspicious of Eve Harrington, he was confident Ritter would contribute a shrewd characterisation casting doubt on Harrington and providing a counterpoint to the more "theatrical" personalities of the other characters. Marilyn Monroe, relatively unknown at the time, was cast as Miss Caswell, referred to by DeWitt as a "graduate of the Copacabana School of Dramatic Art". Monroe got the part despite Zanuck’s initial antipathy and belief she was better suited to drama. Smaller roles were filled by Gregory Ratoff as the producer Max Fabian, Barbara Bates, as Phoebe, a young fan of Eve Harrington, and Walter Hampden as the master of ceremonies at an award presentation. [1]

The film opens with the image of an award trophy, described by DeWitt as the "highest honor our theater knows - the Sarah Siddons Award for Distinguished Achievement." In 1952, a small group of distinguished Chicago theater-goers began to give an award with that name and sculpted to look like the one of Siddons used in the film to actors. It has been given annually, with past honorees including Angela Lansbury, Bernadette Peters, Celeste Holm and Barbara Rush.