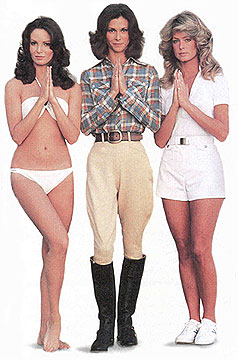 Genre Action adventure
Running time 50 minutes
Creator(s) Ivan Goff
Ben Roberts
Starring Kate Jackson
Farrah Fawcett
Jaclyn Smith
Cheryl Ladd
Shelley Hack
Tanya Roberts
David Doyle
John Forsythe
Country of origin Flag of United States United States
Original channel ABC
Original run September 22, 1976–June 24, 1981
No. of episodes 115
Charlie’s Angels was a television series that broadcast on the ABC Television Network from 1976 to 1981, about three women who work for a fictional private investigation agency, the Charles Townsend Agency. Their boss, Charlie (voiced by John Forsythe), was rarely seen and is never seen full face - in some episodes he is shown from the rear only (where the viewer only sees the back of his head and his arms) and on the series finale where he appears in surgeon’s mask and outfit. He only ever contacted the "angels" by telephone, addressing them via a speakerphone on the office’s desk.

The three original "angels" were Sabrina Duncan (Kate Jackson), Jill Munroe (Farrah Fawcett-Majors) and Kelly Garrett (Jaclyn Smith). Later, when a character left (because the actress went on to other projects, etc) another "angel" was brought on to keep the number at three. Later angels were Jill’s little sister Kris Munroe (Cheryl Ladd), Tiffany Welles (Shelley Hack), and Julie Rogers (Tanya Roberts). Jaclyn Smith was the longest serving TV angel, remaining with the show for its entire five season run. Another major character throughout the series was Charlie’s assistant, John Bosley (David Doyle).

The show’s premise focused Charlie assigning the ’angels’ to a new situation each episode, where they would go undercover in order to investigate ’from the inside’. Their undercover characters often had to feign not knowing each other in the situation, until their cover was inevitably blown. The undercover aspect of the show created much of the plot interest and tension. (The show got permission to use the Alan O’Day hit song at the time, ’Undercover Angel’, and he subsequently re-recorded a version just for the show.) Under their assumed identities, the ’angels’ used a combination of sexual wiles and knowledge learned for the situation in which they were being placed.

The second movie had more nods to the TV series than the first movie in the series did, perhaps due to complaints from fans of the TV series. Whereas most movie remakes of 1970s TV shows, like Starsky and Hutch, are actually remakes, the Charlie’s Angels films are set in a different time. The mythology goes that whenever an Angel leaves, she is replaced so there are always three (seen in the TV show). Liu, Barrymore and Diaz’s characters are not based on the Angels in the show, but are their "successors". To prove this fact, Demi Moore’s character, who is a ’fallen’ Angel, quotes; "Back in my day - we used guns", which refers to the lack of martial arts in the TV series, while it is the preferred form of combat in the films. In the TV series, the Angels were more police-like, generally using guns. Physical struggles, were, however, common. In fact, the silhouette logo of the TV series does show one angel with her hands in a karate-like pose (and the other two with a gun and a walkie-talkie). The karate pose is often included when the show is being spoofed. The martial arts theme in the movies can be seen, in a way, as based on the original TV logo.

Also, Jaclyn Smith reprised her Kelly Garrett role from the TV series, who Dylan (Barrymore) meets in a Mexican cafe when she decides to leave the Angels. Kelly persuades her to rejoin the Angels with an inspiring speech. This reinforces the fact that there were not just three Angels (in fact in the TV series the viewer sees six different Angels), but there have always been three Angels at any one time.

In 2004, a television movie entitled Behind the Camera: The Unauthorized Story of Charlie’s Angels aired on NBC. It depicted the true story of what happened during the first season of the TV show.

In 2006, all three original Angels appeared together on-stage at the 2006 Emmy Awards, in a retrospective tribute to Aaron Spelling.

Despite the critical success of both the TV show and the movies, the video games, aside from the mobile phone version, were a debacle. According to Game Rankings, the GameCube version is the worst reviewed video game of all time (an average of 23%, with Metacritic garnering the same results). Although the PlayStation 2 version didn’t garner enough reviews to be officially listed, this version is virtually the same as the GameCube version. The mobile phone version averaged a respectable 79%.

The first season of Charlie’s Angels caused an explosion of fan hysteria and press coverage that was unheard of in the mid-1970s. It was even highlighted as a cover story in "Time" magazine which analyzed the impact of the show on popular culture.

The show sold many items during its run. These included dolls, (two versions), games, trading cards, notebooks, and even record albums.

[edit] During run of TV series