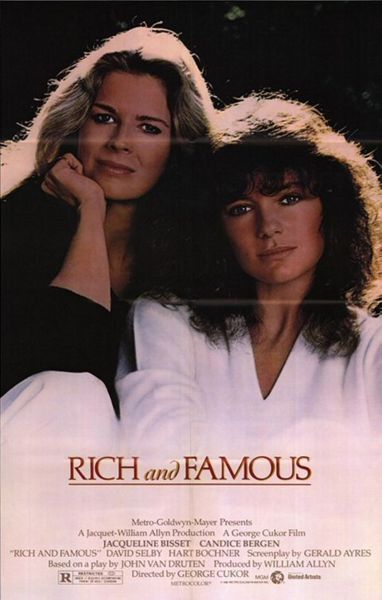 Rich And Famous is a 1981 comedy drama film made by Jaquet and Metro-Goldwyn-Mayer. It is a remake of the 1943 Warner Bros film Old Acquaintance starring Bette Davis and Miriam Hopkins.

The film was directed by George Cukor and produced by William Allyn and Jacqueline Bisset, from a screenplay by Gerald Ayres based on the play Old Acquaintance (1941) by John Van Druten. The music score was by Georges Delerue and the cinematography by Donald Peterman.

Two women find their friendship tested when one rises from obscurity to success: Liz Hamilton (Jacqueline Bisset) a young woman with literary ambitions who writes a critically acclaimed book soon after leaving college and Merry Noel Blake ((Candice Bergen), an all-American blond beauty from Atlanta who desires nothing more than a husband, a child and a life of domesticity. They are close friends who met while they were freshmen at Smith College in the 1950s. Liz has become a highly respected novelist, while Merry wed Doug Blake (David Selby), raised a family and lives in a house on the beach at Malibu. While Merry is happy, she can’t help but envy Liz for her glamorous career as an author. Merry decides to write a novel of her own, and with Liz’s help, the book, A House by the Sea soon finds a publisher and becomes a huge best-seller and Merry’s fame and wealth soon outstrip that of Liz, leading to jealousy between the old friends and problems in Merry’s marriage.

* Robert Mulligan was the original director, but he had to bow out because of previous engagements and was replaced by George Cukor.
* Rich and Famous was the final picture directed by George Cukor.
* The party sequences include such literary and cinematic notables as Christopher Isherwood, Ray Bradbury, Paul Morrissey, and Roger Vadim.