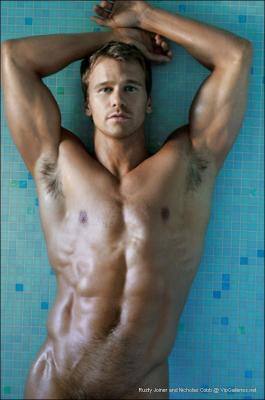 Rusty Joiner was born in Montgomery, Alabama (December 11, 1972)and raised in Atlanta, Georgia where he attended Georgia Southern University as a student athlete participating as a college cheerleader and a gymnastics coach for four years.

Rusty has made guest appearances on EXTRA, THE VIEW, THE RuPAUL SHOW, THE DONNIE AND MARIE SHOW, ACCESS HOLLYWOOD, ENTERTAINMENT TONIGHT, and E! TELEVISION. His face has been seen on the pages of VANITY FAIR, ROLLING STONE, COSMOPOLITAN, and numerous covers of Men’s Health, Physical, MUSCLE MEDIA, and as of the February 2005 issue, eleven MEN’S FITNESS covers making him the most recognizable face in fitness in the past five years.