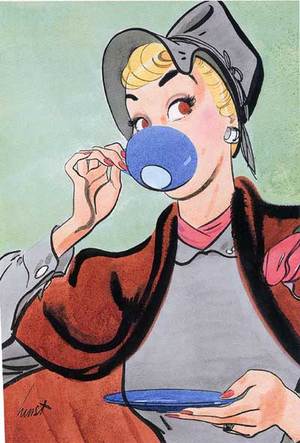 Premier pretty girl cartoonist. Began at Cleveland Plain Dealer, doing comics, political cartoons, even fashion (also contributed editorials). Became direct-mail art director and noticed his art ideas being "borrowed" by magazine artists which inspired him to compete head-to-head with slick illustrators. This transition did not go well. His wife and he nearly starving, he eventually met with Chester Siebold, art director of GE, who tutored Hurst in the steps of getting sold (e.g., submit several ideas, not just a finished drawing). Hurst went on to get assignments from GE, as well as Cannon Mills, Continental Can, Sanka, and a famous run for Jantazen, following in the footsteps of Petty and Vargas. Equally well known for his work for magazines, most numerously for Collier’s, but also American Weekly, True, Home Magazine. Also book illustration (Fun With Astronomy, The Big Book of Space, Playmates in Print, Ghost Town Adventures, The Story of Alaska).

A monograph, "The Art Of Earl Oliver Hurst," was published in 2005