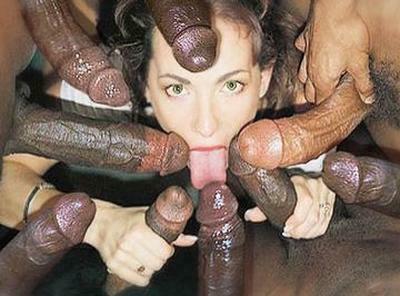 There is ample evidence that the practice was known in various cultures in ancient times, though not by this name. For example, Messalina of the Roman Empire was particularly famous for enjoying gangbangs, and Clodia was accused of it.

Of Messalina, Pliny the Elder writes in his Natural History (Book 10, Chapter 83(63), 172):
“ Other animals become sated with venereal pleasures, man hardly knows any satiety. Messalina, the wife of Claudius Cæsar, thinking this a palm quite worthy of an empress, selected, for the purpose of deciding the question, one of the most notorious of the women who followed the profession of a hired prostitute; and the empress outdid her, after continuous intercourse, night and day, at the twenty-fifth embrace. ”

Nikah Ijtimah was a pre-Islamic Arabian gang bang, leading to marriage if a child was conceived.

The events invited unpaid amateur participants, mixed with a few paid professional performers (who could be relied upon to provide better film footage). All were screened for venereal diseases ahead of time. Usually, the men would stand in line to have sex with the actress for a brief period of time, a few minutes or less, then get back into line for the next encounter. The actress could be engaging three to five men at a time, including masturbation and oral sex, and each sex act was "counted" as a separate instance, so a "record" of several hundred usually involved less than a hundred men. All amateur participants were required to wear condoms.

* World’s Biggest Gang Bang II 1996 starred Jasmin St. Claire performing in 300 sexual acts [2], solely with condoms (unlike Chong, who didn’t use condoms for oral sex). She had to take a break to ice down her genitals during shooting, and was criticized for bad temper and not appearing to be interested in the event, earning her the title Ice Queen. Luke Ford reports approximately 51 men participated.

* Houston appeared in Metro’s Houston 500 (sometimes called Houston 620) [3][4], in which she allegedly had sex 620 times (reportedly 50 or so men turned up and recycled) without interruption on February 6, 1999. Even taking into account she was engaging in multiple sex acts at a given instance, many eyewitness accounts claim even the 620 figure was greatly exaggerated.

The Polish series doesn’t recognize Candy Apples’s or Sabrina Johnson’s records, and compare themselves only to Houston’s record.

In software development, the use of large numbers of loosely coupled programmers in an attempt to wedge a great many features into a product in a short time. Though there have been memorable gang bangs (e.g., that over-the-weekend assembler port mentioned in Steven Levy’s Hackers), and large numbers of loosely-coupled programmers operating in bazaar mode can do very useful work when they’re not on a deadline, most are perpetrated by large companies trying to meet unrealistic deadlines; the inevitable result is enormous buggy masses of code entirely lacking in orthogonality. When market-driven managers make a list of all the features the competition has and assign one programmer to implement each, the probability of maintaining a coherent (or even functional) design goes to epsilon. See also firefighting, Mongolian Hordes technique, Conway’s Law.