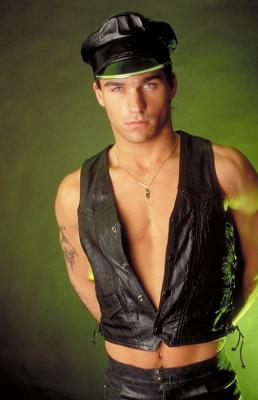 Nick Iacona grew up in suburban Philadelphia (Chester, Pennsylvania). His father died when he was 15. After several years of prostitution and drug use in New York City, Iacona moved to Los Angeles and enjoyed a meteoric rise to stardom in gay pornography. A notable reason for his popularity, besides his smoldering good looks, was his early mastery of the "hungry bottom" (sexually submissive but verbally demanding) persona.

His image and success caught the attention of Madonna, who used him as a model in her 1992 book Sex.

During his lifetime, he was the subject of rumors (some of them spread by himself) regarding his relationships with prominent entertainment industry figures who were known to be gay. At a May 1990 dinner and interview with Jess Cagle (People Magazine) and Rick X (Manhattan Cable TV’s "The Closet Case Show"), hosted by Chip Duckett at the NYC restaurant Florent, which was also attended by Michael Musto (Village Voice) and Robin Byrd, Stefano discussed a "date" he had with David Geffen. After the interview appeared on Rick X’s show, OutWeek Magazine "outed" Geffen, who went on to proudly announce his gayness at an AIDS fundraiser. The interview can be viewed at Rickx.com [[1]].

Iacona died of an overdose of cocaine, morphine, heroin and ketamine at age 26. His body was shipped back to Pennsylvania and he was buried next to his father.

Charles Isherwood, in his 1996 biography Wonder Bread and Ecstasy (Alyson Publications), alleges that Stefano was molested as a child.