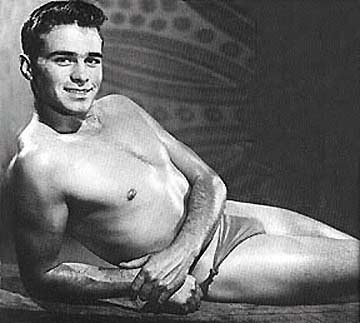 Handsome Glenn Corbett got his start as a physique model for Bob Mizer’s Athletic Model Guild, most often appearing on the pages of AMG’s Physique Pictorial under the moniker Glenn Robinson. But by the end of the 1950s, Corbett had begun making films and ended his association with Mizer’s studio. One of Corbett’s earliest performances was in the Ed Wood-penned 1956 low-budget shocker The Violent Years. Also look for him in the William Castle film Homicidal (1961; with Patricia Breslin and Joan Marshall), which is an interesting version of Alfred Hitchcock’s Psycho. He was more successful in television, starring in series such as Route 66, The Road West, and on the TV soap The Doctors. He’s also the star of the made-for-TV movie The Stranger (1973), which aired on Mystery Science Theater 3000 as episode #305: Stranded in Space. Sadly, Corbett passed away in 1993 at the age of 58 from lung cancer.