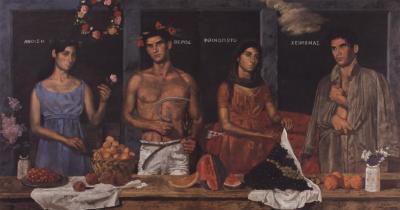 Born in Piraeus, he studied at the Greek School of Fine Arts (1929-1935). He was also a student of Photis Kontoglou, who introduced him to Byzantine iconography, whereas he also studied popular architecture and dressing customs. Together with Pikionis, Kontoglou and Agh. Chatzimichalis he led the movement for the introduction of Greek tradition in painting.

From 1935 to 1936 he visited Istanbul, Paris and Italy. He came in contact with the Renaissance art and Impressionism. He discovered the works of Theophilos and met influential artists such as Henri Matisse and Alberto Giacometti.

He returned to Greece in 1936 and two years later he realized his first personal exhibition in Athens. He participated to the Greco-Italian War of 1940. In 1951 he made exhibitions in Paris and London. In 1958 he participated in the Venice Biennale. In 1967 he moved to Paris.

In 1982 the Yannis Tsarouchis Museum in Maroussi, Athens was inaugurated. The Museum is actually hosted in the house of the artist. There is also the Tsarouchis Foundation.