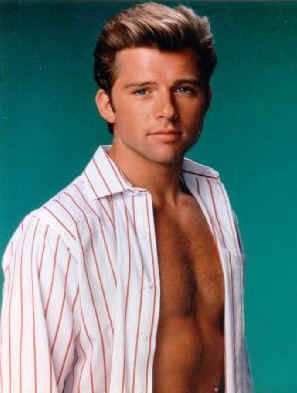 Maxwell Caulfield (born on November 23, 1959 in Glasgow, Scotland) is a Scottish-American actor.

His American stepfather, a Marine instructor at Parris Island, kicked him out of the house at the age of 15.

He moved eventually to the U.S., got his green card and found work as an exotic dancer before making his acting debut off-Broadway in the title role of Joe Orton’s Entertaining Mr. Sloane as a drifter.

He went on to star in the musical film Grease 2 (1982) opposite Michelle Pfeiffer.

At 21, he married Juliet Mills (18 years his senior) in 1980, and became stepfather to her daughter, Melissa Miklenda (who now goes by Melissa Caulfield).

He also appeared in the first episode of Beverly Hills 90210 as an older man interested in Shannen Doherty until he finds out how young she is. He appeared in a humorous role as "Rex Manning", a spoiled has-been rock star, in the film Empire Records (1995).

He made his Broadway debut in J. B. Priestley’s An Inspector Calls opposite Sian Phillips.

He voiced the character of Alistair Smythe in Spider-Man: The Animated Series from 1994-1998 and was the voice of James Bond in the videogame Nightfire.

He returned to the United Kingdom in 2004 to appear as Dr Jim Brodie in the highly-rated BBC medical drama Casualty.

Maxwell is currently performing the lead in ’Tryst’ off-Broadway.

He and Mills reside in Santa Barbara, California.