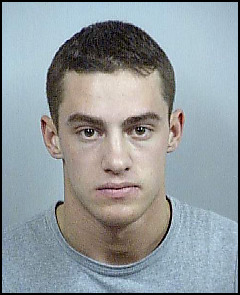 Marcus Allen (real name Timothy J. Boham), the gay-for-pay star of Falcon, Maleflixxx.tv, Hot House Entertainment and featured in this year’s PLAYGIRL; CAMPUS HUNKS listed as “John” [See QC Link] is on the run and wanted in connection for murder.

Detectives have identified the alleged gunman in the killing of the president of a Denver company that purchased and sold consumer debt. Timothy J. Boham, 25, is considered armed and dangerous, and detectives are looking at the possibility that he may have fled Colorado, according to police spokeswoman Detective Virginia Quiñones. The victim, John P. Kelso, 43, was found in his Congress Park home Monday morning by a housekeeper. Detectives think Kelso was killed sometime over the weekend.

A man wanted in the death of a wealthy business man was arrested this morning near the Arizona border with Mexico by U.S. Customs and Border Protection officers, officials say.

Timothy J. Boham, 25, was being sought by Denver police in the shooting death of John "JP" Kelso, founder of Professional Recovery Systems, a Denver collection agency.

Boham was captured while loitering near the Lukeville port of entry at about 10:40 a.m., said Roger Maier, spokesman for U.S. Customs and Border Protection.

When he was approached by customs officers, he told them he was being sought on a first-degree murder warrant out of Denver. The officers arrested Boham and confirmed that he was a murder suspect, Maier said.

Denver detectives are making arrangements to have him returned to Denver, he said.

A suspect in the slaying of a wealthy Denver businessman was arrested Thursday morning near the Mexican border in Arizona by customs officers.

Boham was spotted standing a few feet from Mexico at the Lukeville port of entry about 10:40 a.m., said Roger Maier, spokesman for U.S. Customs and Border Protection.

When he was approached by customs officers, Boham allegedly told them he was a first- degree murder fugitive out of Denver. The officers arrested Boham, and Denver detectives are making arrangements to have him returned to Denver, Maier said.

Boham worked at Kelso’s company, but the nature of any relationship between the men is unclear. Police have not identified a motive in the slaying.

A conflicted portrait of Boham emerged Thursday through interviews with friends and business associates.

Working as a model and boasting of numerous girlfriends, Boham led associates to believe he hated people who are gay. Yet he acted under a pseudonym in gay sex movies with titles like "Through the Woods" and "Road to Temptation," according to the website gaypornblog.com.

But Boham told Lara Holland, who lived in a Denver mansion on High Street in an apartment a floor below Boham, that he "sanitized" his apartment by thoroughly scrubbing it because a gay man had lived there previously, she said.

Kelso was widely known to be homosexual.

Boham had the right look but not the right attitude for modeling work, Lail said.

"He didn’t like people telling him what to do. He seemed like an angry person. His opportunities were tapering off."

Boham has an explosive temper and owned a large collection of guns, including a rifle with a silencer and a scope, Holland said.

Boham, who has a 5-year-old daughter, also picked fights over petty disputes with friends, she said.

"He got into bloody fistfights," Holland said. "He just had anger issues."

Meanwhile, employees said Kelso was a conservative workaholic and philanthropist.

"He loved to entertain," said Seth Hill, Kelso’s former personal assistant who is in management at Professional Recovery Systems. "He threw some of the most ridiculous parties."

A Marilyn Monroe impersonator sang "Happy Anniversary, Mr. President" to Kelso at one lavish party he threw at a Las Vegas business conference.

A frequent contributor to the Children’s Hospital of Orange County, Calif., and numerous other charities, Kelso recently bought an electric guitar signed by Paul McCartney for $100,000 at a charity auction and gave the guitar to a friend, Hill said.

He was the consummate salesman and found niches in buying and selling debt that competitors avoided, Hill said.

A collector of art, Kelso covered the walls of his house with paintings, said Robbie Marks, who owned Marks and Marks Gallery in Denver. He had a stone replica of Michelangelo’s "David" on a pedestal as well as sculptures of female nudes in his house.

"He was wonderful," Marks said. "He was one of those kind of souls people gravitated to."

Kelso was a member of Mensa International, an organization that accepts people with IQs in the top 2 percent.

"He was bright, charming and loved people," Marks said. "I find this so senseless."