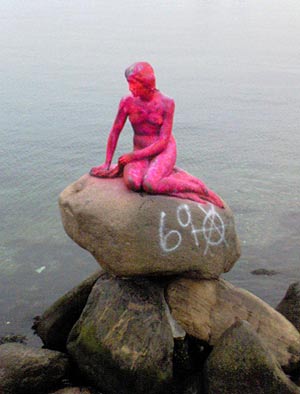 The statue was commissioned in 1909 by Carl Jacobsen, son of the founder of Carlsberg, after he had been fascinated by a ballet about the fairytale. The sculptor Edward Eriksen created the statue, which was unveiled on 23 August 1913. He used his wife Eline Eriksen as the model.

This statue has been vandalised several times, but has each time been restored. On 24 April 1964, the statue’s head was sawn off and stolen by politically oriented artists of the situationist movement, amongst them Jørgen Nash. The head was never recovered and a new head was produced and placed on the statue. On 22 July 1984, her right arm was sawn off. The arm was returned 2 days later by two embarrassed young vandals. In 1990 another attempt was made to cut her head off, which resulted in an 18 cm deep cut in the neck. On 6 January 1998, she lost her head for the second time, the culprits were never found, but the head was returned anonymously to a nearby TV station, and on 4 February the head was back on.

Red paint has been thrown on her several times, including one episode in 1961 where her hair was painted red and a bra was painted on her. On 11 September 2003, the statue was blasted off its rock, possibly with dynamite. The Little Mermaid was also draped in a burka as a statement about Turkey joining the European Union. On March 8, 2006, a dildo was attached to the statue’s hand, green paint was dumped over it, and the words March 8 were written on it. It is suspected that this vandalism has something to with International Women’s Day (which is on March 8) and that it was committed by anti-feminists. [2] Recently, Copenhagen officials have announced that the statue may be moved further out in the harbour, as to avoid vandalism and tourists climbing onto it.

The relatively small size of the statue typically surprises tourists visiting for the first time. The Little Mermaid statue is only 1.25 meter high and weighs about 175 kg.

There are similarities between the Little Mermaid statue and the Pania of the Reef statue on the beachfront at Napier in New Zealand, and some similarities in the Little Mermaid and Pania tales. The statue of a woman diver (titled "Girl in a Wetsuit" by Elek Imredy) in Vancouver, Canada was placed there when, unable to obtain permission to reproduce the Copenhagan statue, Vancouver authorities selected a modern version.

An undamaged copy of the statue is located in Solvang, California.