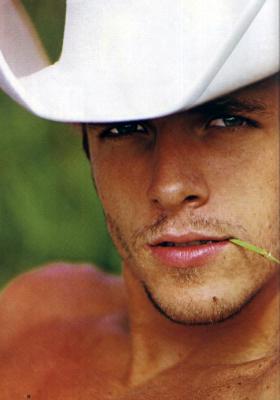 Ricardo Villani, this months G Magazine’s centerfold in their Tribute to Brokeback Mountain special issue, was born on May 23, 1984, which makes him 22 years old. As a kid his parents took him on trips to the mountains on regular base, so Ricardo is no stranger when it comes to spending some quality time in the field. So when G Magazine cast him to be a cowboy, Ricardo was happy to jump into the saddle. And that he is a good rider shows in how well he handles his saddle button.Ricardo_villani6 Ricardo_villani9Ricardo_villani4
Altogether the session turned out to be a success, with great photos in G Magazine of this beautiful man with his boyish face and a body that radiates sex. We can only imagine what Ennis and Jack would have done if they would have met Ricardo on their side of the mountain.